The best thing about Black Rock City 2006 was the sense of neighborhood that is growing out on the outer rim, this year, Hope street. What could be better than taking a walk down the block to visit our friends from Santa Barbara in the Love Camp, or in the other direction, the Break It Down camp, the reggae band from San Fernando? Of course, other friends live in different parts of the city, and as usual, we enjoyed surprise visits or synchronistic encounters with people we have known now for many years, such as Leslie and Cory, touring in the white shuttlecraft.

Cleu camp turned out to be a popular tourist destination this year, with a number of people showing up to camp in the Cleu village. People from all over just showed up saying they were looking for the Cleu. In addition to our 21st and At-Onement bus, we put up a 22-ft diameter yurt out in the walk-in camping area. Waking Grounds, a BM camp from Eugene supplied some of the people.

[putting up the yurt]

Coi showed up with a lovely van complete with a most comfortable large yellow couch on top.We had an assortment of cars and tents clustered around the main Cleu camp, so even though we weren’t particularly organized, our area did feel more like a village. As usual, the Cleu camp site was located at 3:45 on the outer rim (Hope), staked out for us by our longtime neighbors, Wayne and Alien, from Colfax, California. This year, we had more help preparing, packing, cleaning up, and decompressing than ever before. We even had a Recompression gathering in June– a practice we plan to continue. 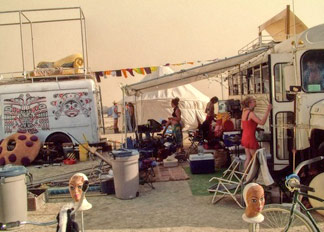 The Cleu labyrinth was a favorite meditation place on the playa. Positioned directly in front of the Conexus Cathedral, the labyrinth traced out the shape of the Cleu within a 60 ft. diameter circle raked in the playa, with each circle defined by bamboo poles and ribbons of color-coded tape. 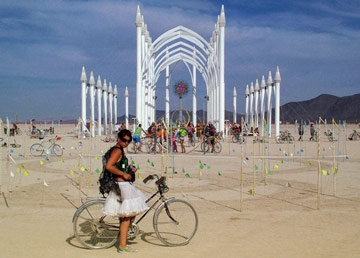 The Cleu crew and some willing volunteers helped us put together the labyrinth during a dust storm. The labyrinth was like an island of the spirit in the midst of activity and movement. 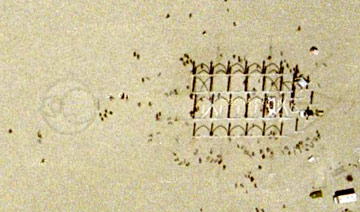 [The Labyrinth & Cathedral from above]

Participants could walk through the entrance, a vertical bamboo Cleu 10 ft. in diameter, put together by Yoko from Eugene. Participants could choose to walk the circles of Universe, Earth, Life, Consciousness, in whatever order they chose, for as long as they liked. Some people did yoga or sitting meditation in the very center of the labyrinth. Raking the paths of the labyrinth was another wonderful form of meditation. 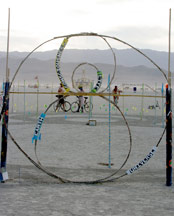 [The entrance to the Labyrinth]

Our pilgrimage to Black Rock City was glorious, made better by a good crew. The core Cleu crew: Capitane le Cleu and Emma the Cleu lady from Lakeview, Oregon; Hank from Hurricane, Utah; John and Kiera from Ontario, Canada; Yoko and Bodhi, from Eugene, Oregon; and Russ from Santa Barbara, California. 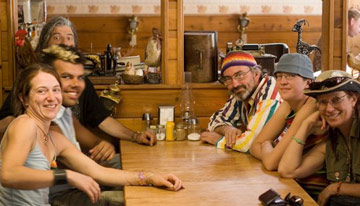 [Some of the Crew]

The labyrinth was designed by our own Capitane le Cleu. The labyrinth was lit at night by 50 blinking bike lights, donated by our crew member Russ. John and Kiera joined Emma the Cleu lady to do some rock kirtan in the center of the labyrinth, and also some spontaneous Cleu brainwashing with the magical happy apples. Hank was our maestro on the megaphone. Bodhi kept the positive energy flowing.

Thanks to everyone who helped make the Cleu Labyrinth and camp a reality! 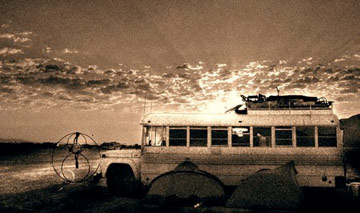