Well, we’ve finally shaken most of the playa dust out of our belongings. Our annual pilgrimage to Burning Man 2005 was a huge success. We gave away over 800 Cleus personally at Cleu camp (3:45 and Hysteria), and distributed over 1000 Cleu cards at the Center Camp. The Cleu lady (Emma) continued her scouting missions, giving Cleus to artists, volunteers, and others, but this year was unusual in that more people than ever before made the pilgrimage to Cleu camp on the outer perimeter of the city. 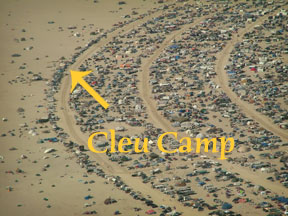 The theme this year was “Psyche,” and we intended to have a Brainwashing Machine ready, but it didn’t happen, and instead, Emma put together her own little ritual that went over extremely well. Not only were people showing up in camp looking for a cleu, but once the word got out, many insisted on having their brains washed too. It turned out to be so popular that we ended up working a six-day week and having to recruit the newly brainwashed to assist. If you’d like the “Clues to Do-it-Yourself Brainwashing, or your very own “Cleu Brainwashing Kit,” let the Cleu Lady know 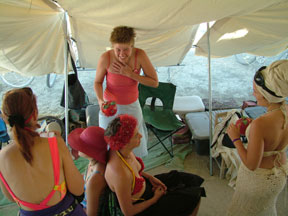 As always, we enjoyed reconnecting with friends that we’ve camped near year after year: Wayne & Alien and their entourage, el Presidente (David) and his First Lady (Susan), Brother Buzz (Ben) and the boys (and their ladies), Mark, Lapis, and Goatsfoot, Fish, and all the guys at Break It Down Camp. Lonnie, one of last year’s crew, gathered a great group of friends and set up camp right across the street. We even had a sister camp this year. “Waking Grounds,” a camp from Eugene, was inspired by our own Yoko to wear the Cleu as a sign of their unity. And this year, Cleu Camp welcomed the addition of Dr. Placebo (Russ), a long time friend and favorite photographer, and his son-in-law, Jason, a first-time Burner from Portland with roots in New Zealand. The good Doctor graced the camp with his generosity, sharp wit, and intriguing conversation and observations. One of the premiere experiences for Captain LeCleu (Gian) was officiating at a double hand-fasting of Ben and Michelle and Cannon and Brittany at the Temple with a gathering of friends. Best of luck to the new couples over the coming year! We’ll be looking for you again next year. With just a little more organization and communication, we may become an unregistered, on-the-edge, fantastic Cleu village. 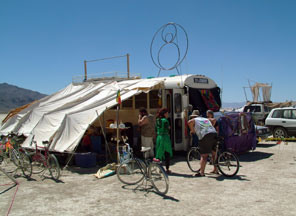 Among the many wondrous synchronicities of Black Rock City, one magical occurrence stood out for us. On a late-night bike ride, Emma the Cleu lady noticed a neon art installation and went closer to see it. As she read the quotes on the plastic bubbles housing what appeared to be mystical symbols, she came to the last one and was astonished to see a Cleu with the following quote: “Lucky being! You are not made of steel, but flesh and consciousness.” A few days later, when Emma returned with Gian, they arrived just as the artist was beginning to remove her work. She said she “got a Cleu” two years ago and has been captivated ever since. Emma made a point of thanking her for helping the Cleu become a meme, that is, a bit of cultural information that is passed from person to person, spreading like a virus until it becomes self-replicating. Since we hope to infect the culture with a vision of At-Onement, we rejoice to see the Cleu being used in such a way. 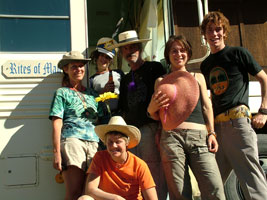